Yet another update on my realm of chaos warband: 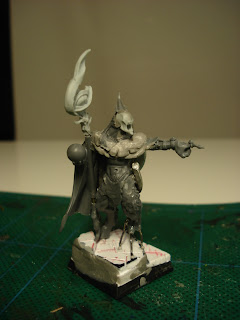 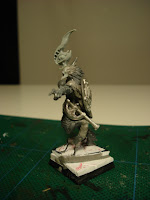 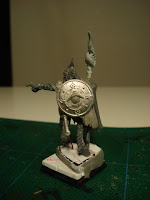 The mini is based on the same great plastic brayshaman. The head is from the Witchling + some horns from the screamer kit. The ball and cape are from the empire wizard kit, the staffhead is from the witchling as well. The axe is from crocodile games and the shield is from reaper + some instamould from the warhammer 40k chaos veichle kit. The leg with the wierd (and unfinshied) foot is made from a bloodletter head + some wire. The pointing hand is from the skaven stormvermin kit and I saved this bit for a wizard for a long time as I really love the ring on the finger. If I have the energy this guy will have another ring or so. 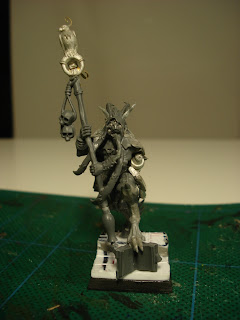 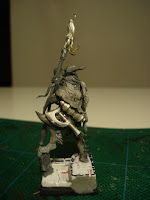 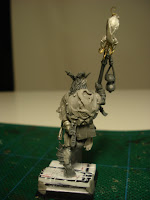 Next beastman is the one already shown, but I have changed some stuff.
This one is also made from the GW plastic great brayshaman. I changed one foot to a kroot foot so it could hold the book from the empire wizard kit. The other leg got shaved and I added a spiney thing from a dark elf corsairs banner. The axe is also from Crocodile games and the scroll from PP. The book on his back is from the GW empire flagilant kit and it is covered by a shield made from a gutplate with a insta mould on top of the Tzeentch icon from the 40k veichle kit. Bottom of the staff is from a Dark eldar transtport and the top from crocodile games. The horns were changed with the use of a candle and some tweezers. 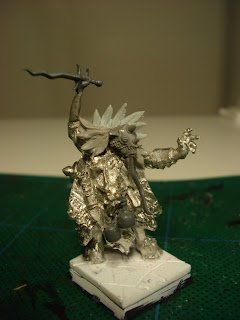 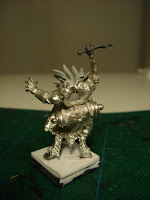 Last of the gors is a dude made from Malagor the dark omen.
So far only a head from a gor (previous edition) + some feathers from the witching. I also added some bottles from the VC corpse cart and a knife from the empire wizard box. I also slapped on a scroll case from PP. So far not too much to see but I'm getting there.