A trip down the lead mines 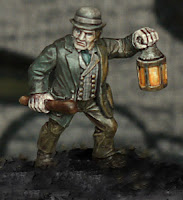 Hey guys, sorry I have not been very active with the brush recently, lost my mojo a little bit. I have been painting elves on commission and don't feel much like painting my own stuff after all those skirts ;)

Here's a little thing I did in between dragon scales! I might take up steampunk gaming later in the year so I had a wander round the old lead mines. Sure enough, I found this suspicious looking character lurking around one corner. He's an old Foundry figure, I whizzed on some paint just to test a very muted, slapped on scheme. If I do start gaming, it's likely that a "warband" would be just 7 or 8 figures like this, so I could get the whole lot done in one day! Just the ticket when faced with three thousand elf gems.
Lähettänyt Nord klo 9:14 AM