Here's a project that I started years ago and finished recently. When the first ogre armybook came out, I immeadetly had the idea of a butcher with this familiar steel mask.

He plays the role of Slaughtermaster in my ogre army or a lousy unit filler in my chaos dwarfs army, dunno yet.

Why did I make this piece?
Well, the ogre imagenery is full of harsh pointy shapes, fangs and stakes and so on, and the red fang is a familiar warpaint style on ogres. So, my ogres carry the image of their spiritual leader on their backs - the unholiest killer of the tribe who's face is a mystery. Is he a living dead construct or a genetic test of chaos dwarfs? Who knows.


Your comments are highly appreciated! 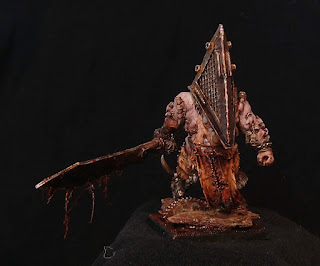 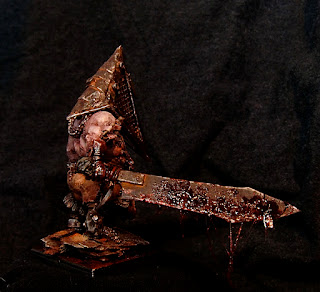 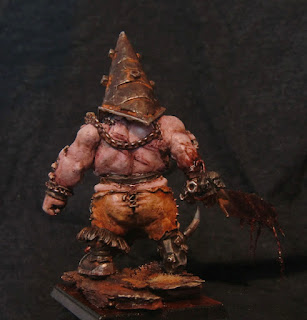 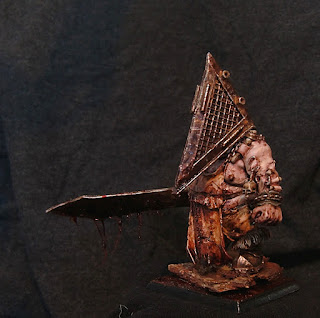 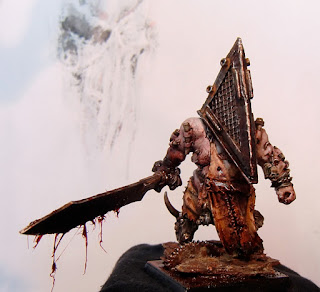 I've made three versions of this model. The first incarnation of Pyramid Head butcher was quite catastrophic, and the pyramid looked funnier than I thought and not menacing at all. The second incarnation was better but still not perfect in my opinion. And then, 3 years later I decided to construct the pyramid once more with the looks of Silent Hill movie monster (and Silent Hill 5) with this net-like sides (which really isn't net, it's small square rivets but I was lazy and decided to make this pyramid out of mosquito net. If I someday make newer version of the pyramid, I'll totally do the riveting.)

The pyramid was made out of thicker paper and mosquito net with some guitar wire and knobs from a old toy. There's also little amount of green stuff and a bucketful of superglue...

The blade is  made out of plastic sheet and it's covered with my hair and superglue. The apron is a part of plastic giant kit, I just gave it few stiches anf glued to it's place. That's about it!

The boss of the bosses + random WIPpery

The first warhammer army I got was the mighty Orcs and goblins.

I started to practise painting with the 6th edition army boxset warriors and bowmen and I still have them somewhere. Now a decade later the army is far way from finished but it has some tasty looking units that need a fresh coat of paint. Here's the lord of the army - Gorbad Ironclaw - with a banner of extra manhood and "don't get to my way"-attitude.

The banner was made out of paper and superglue. I also swapped the little horns to curvier ones and added a small moon idol to the top of the stake. I know that the moon is more like goblin's stuff, but hey, what the heck. Maybe this Gorbad fancies fabulous fabrics?

Oh yes indeed he does! That's the reason for the stripey pants (a salute to the Spiky Rat Pack's awesome work with the 40K characters, and with the clown pants)! 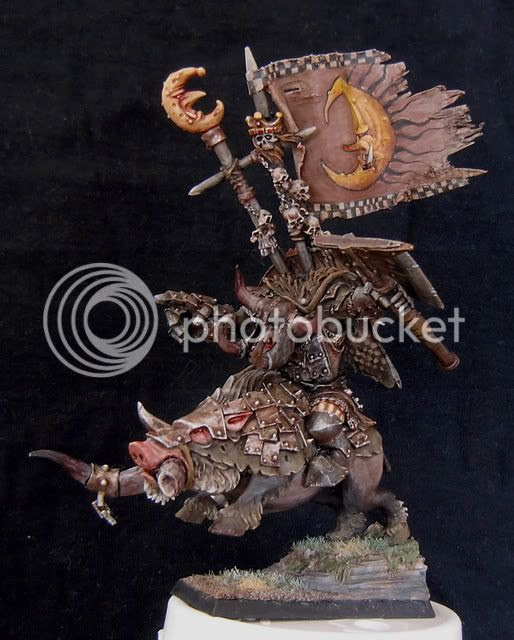 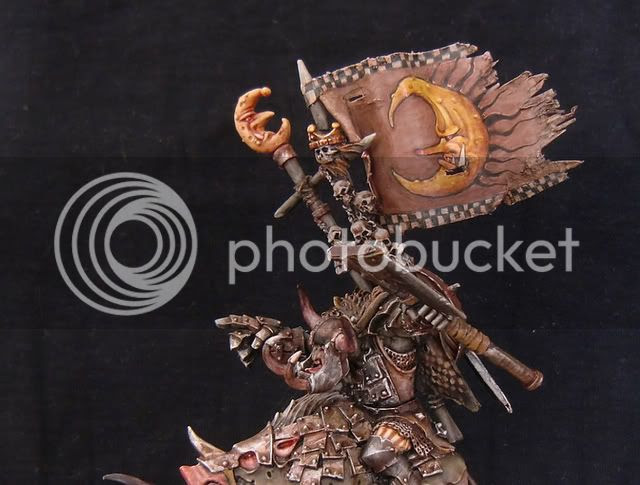 Then there's few more or less WIP's of Chaos stuff - Nurgle flyman and Chaos Dwarf rocket launcher. I prefer the inversed rocket more than the original position... I just have to add somekind of weight or anchor to the other side of the rocket or the launching could end up in a horrifying disaster. Heh. 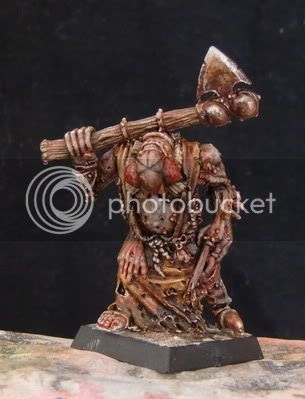 Back to the track with Chaos Dwarfs. I decided to do a test with the shields by adding a piece of paper to the shields back. This looks like that shield has taken some beating and aging, but note that that particular shield is just a test.