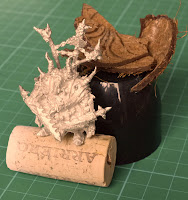 Hey guys, who would like a little Nurgle love to chase away those midwinter blues? Here's an Avatars of War figure and the start of a scenic base, made from the top of a deodorant can and some coconut shell. The metal figure is nicely detailed and pretty chunky, he's a cuddly fella!

I glued on the shell to the plastic can top using superglue, then let it dry while I had a spot of lunch. Then I decided to drill holes into the base to pin the figure on to it. Of course, the shell immediately came loose from the base. So I have now fixed it on using grey stuff putty, it acts as a glue for me, I rarely ever sculpt with it.

Here's another picture a couple of hours later. The shell is now secure and I have added a tree root and a few other bits to make it more "rooty". The figure is not glued to the base, I use the wine cork when painting. I will probably make a second more standard base, just for gaming. I am hoping to enter the WAMP Avatars of War painting competition with this guy, so there's just two weeks to get him done. More WIP shots to come later in the week.

There, you feel better now don't you?
Lähettänyt Nord klo 7:48 AM