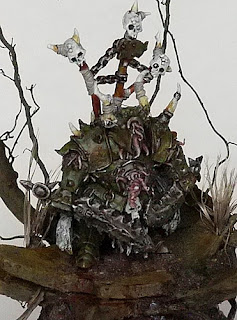 I am making slow progress on painting the Nurgle Lord, who I have tentatively named Anguis Lumbricus, King of Worms. Some basic colours are on and shading started, but there's still a long way to go. I have been slowed by, what else, a bout of illness, which knocked me out for three days!

Green armour is a bit of a cliche for Nurgle figures, but in the end it seemed right for this figure. I reckon on the pink of the worms and the red raw boils (still to be done) to really stand out on the green background of the armour.

What are you guys working on at the moment?
Lähettänyt Nord klo 7:43 AM