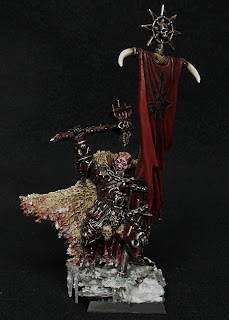 Toss and crunch. That's the sound of me throwing down the gauntlet, then it landing in the snow. In other words, here's my entry for the Warhammer Forum Winter Challenge. Let's see yours!

As you can see, I managed to angle the banner so it does not cover the face and hammer, while still showing the banner design. It's based on slate and coconut shell, and it might look like it could topple over but it's pretty stable. This guy will stand on the front corner of a regiment in game which is why he's edged over to the side a little.

The icicles are made from a clear plastic rod from a flying stand, heated and softened in the flame of a candle, then gently stretched used pliers, then carved a little with a craft knife. Not too bad for a first attempt, they are surprisingly tough, hopefully they will  survive the rigours of gaming (and if they don't, I can always whip up some more).

Not much opportunity for grime in all that lovely crisp snow, but note that the bearskin cape has been dragged through a little blood, and the hammer is a bit gory. Gotta have blood and snow together, always good  - maybe I should add a few drops of the red stuff in the white stuff, though I was trying to avoid it looking too much like a Khorne nutter, even if 99% of people would say that he is when they see the red armour.
Lähettänyt Nord klo 9:13 AM