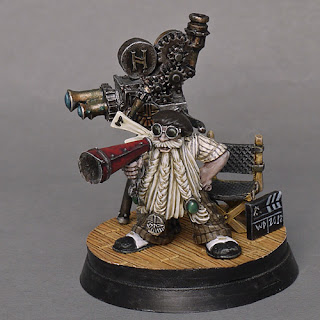 Hey guys, here's a recent commission piece which was a first for me, a finecast figure with no bubbles! It was still a pain to clean though, I always feel as though the figure is going to disintegrate in my hands as I gingerly scrape off the damned mold lines and tons of flash!

I was given total freedom over the painting scheme. At first I considered black and white, as per 1930's hollywood movies, but decided that was a bit too radical. But it did inspire me to aim for a sort of sepia palette, with a flash of colour in the red megaphone and contrasting green gems. I also very cleverly put "WD 2012" on the clapper board - pleased with this flash of genius I sent off the pictures to the client. He liked them, but pointed out it was the 2013 figure. Curses! A little job to start the new year then.
Lähettänyt Nord klo 2:26 AM