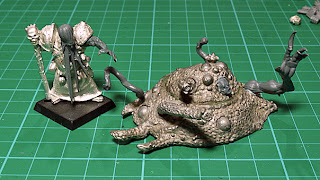 I was sifting through my bits, looking for some bits to add to the plaguebearers, when I came across the old metal fat chaos sorceror. I don't think he was ever strictly a Nurgle character as he has the generalised chaos star symbol hanging round his neck. I filed that off and then had a play around with various heads - plaguebearer, fly, etc. I finally went with the strange dome head from the chaos spawn sprue - the spikey bits are reminiscent of a wizardy beard. The hand is from a bloodletter (I think), it needs a little carving and refining. One chaos sorceror added to the painting pile.

I also found this massive old metal thing, I was given it years ago by one of my clients, I have absolutely no idea what it is. I blu-tacced on a few bits just to get some ideas rolling. It could be a chaos spawn or a beast of Nurgle or even a plaguebearer unit filler. It's pretty big across the base, it would fit on a 60mm but slightly overhangs a 50mm. One other idea would be to make a little unclean one, by trying to sculpt a smiley head on the top and maybe a couple of arms, fill in the holes with pustules, mouths, etc. Just messing about at the moment, I would be happy to get more ideas if anybody has any suggestions?
Lähettänyt Nord klo 2:27 PM