The magical mailman gave me a cute little package today. I bought these terminators from a random wargamer, and because he had started to add some paint to the minis these were quite cheap unit. Actually there's just white basecoat, few washes and some lovely green plus some metals. Methinks I just continue with the former scheme the owner started working on. These are cool terminators! But I don't know if DA had these sort of armours... (and I don't care. They will be Dark Angels!) 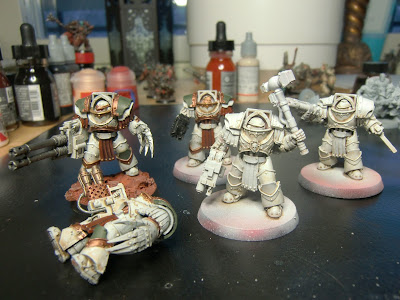 The next thing I'll start today is 10 man strong unit of Chaos cultists from the Dark Vengeance box. I decided to try grey primer with a smoke of white primer. Due the low temperature outside the white primer didn't work as I thought, but it's okay. I thought that the grey would be more visible under the white smoke but the white primer refused to work as smoke. It kinda pooled around the minis and the are more white than grey. Oh well! It's nice to try how the grey affects my paint splashing! 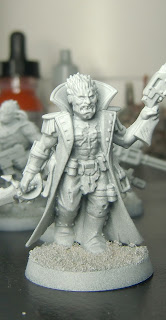 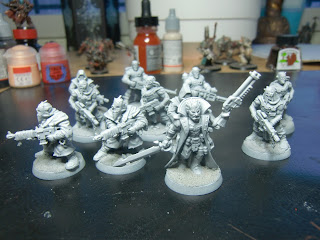