Okay folks. Few months ago I visited a wargames store in Joensuu, Finland, and I decided to buy those new GW paints. I only bought 2 of them and I felt embarassed because my shoppings were so tiny (finnish mentalitet I guess?). So, I also bought this Vampire Counts Necromancer which indeed is a cool mini, even there's not that much detailing or muscles or spikes or any other annoying things - only the huncbacked black magic expert.

Two days ago I raided my bitz box and found some of the Giant kit's parts, for example the running peasant and that giant's fist holding another peasant. I chopped the excess away and look at that, here we have some zombified peasants! Jolly Good! 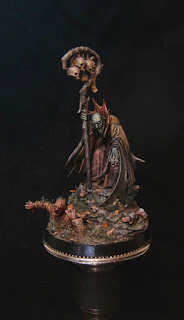 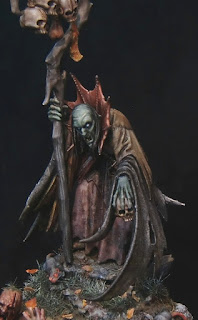 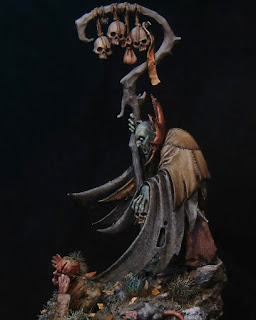 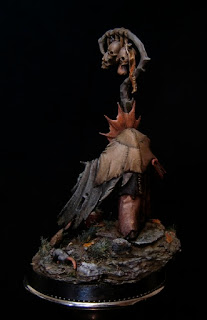 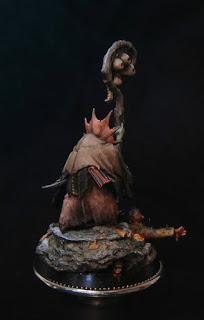 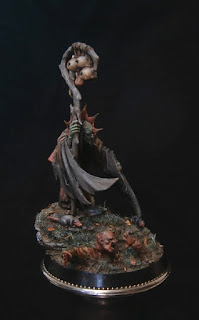 As you can see, the corpses aren't rotten yet. Fresh victims of the plague or whatever!
Eventually I found some use for the tiny mice from the Hellpit Abomination box. Boy they are small critters....

I did this piece in the atmosphere of waiting Halloween to come, and that's why I used retro colours and tried to make this scene a bit funny too. The red eyed mice... Maybe they are the ones who are using black magic there and the hunchback freak who likes skulls was just walking buy and saw this resurrection? Who knows.

I'm lucky to have this size of candle holders - a bigger round base fits there almost perfectly.